Ah, tax strategies. Eyed with hopeful suspicion by the uninitiated, a tax strategy can feel like a fun Spy Vs. Spy game – but that other spy? That’s the government. Many a newly minted spy would consider backing away from anything that might have you facing that particular adversary.

Don’t worry, this plan won’t end up placing a bomb in your pocket. Canada Revenue Agency is very much aware of the spousal loan strategy, and as long as you cross your t’s, dot your i’s, and take the advice of your accountant, you shouldn’t get into any trouble.

Canada’s prescribed interest rate has been sitting at rock bottom – 1% – since April 2009, with the exception of two quarters in 2013, when it ratcheted up and quickly fell back down again. UPDATE: The prescribed rate for spousal loans was increased to 2% as of April 1st, 2018. Click here for current prescribed rates.

This rate is used as the base to derive Canada Revenue Agency’s (CRA) actual interest in the following situations:

The Prescribed Rate + 0% is also used as the base interest rate on loans to family members. This is where the “tax strategy” piece comes in. Since the current rate is low, it could be useful if you decide to lend your spouse a pile of money, which your spouse would then invest. Your spouse would (hopefully!) earn more piles of money on that original pile, and then be the one to pay tax on earnings. As your spouse is a borrower, they would also pay you interest on that original loan, but that interest would be tax-deductible to your spouse because it was used to make an investment.

You, the lender, would declare the interest earned as part of your income. The result is that the 1% interest earned on your return would be far less than the investment earnings on the pile of money. Therefore, you would pay less tax. Your spouse, who would be in a lower tax bracket than you are, would then pay tax on those investment earnings at their lower tax rate.

Of course, the loan would have to be properly documented and the interest must actually be paid – within 30 days of the end of the year – for any of this to work and remain onside with CRA.

Here’s an example (borrowed from the Institute for Advanced Financial Education): 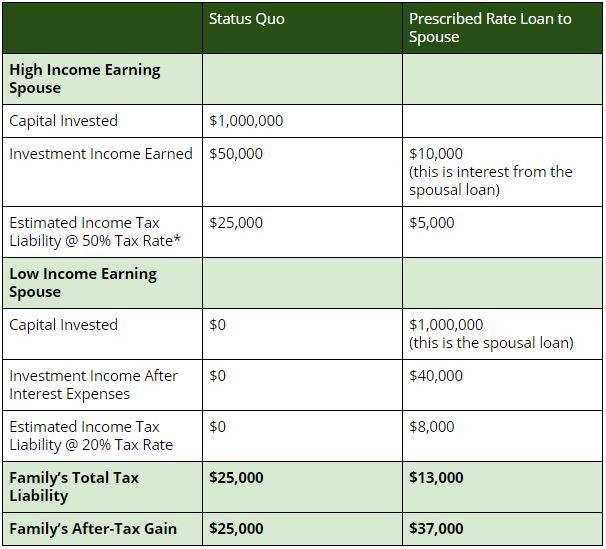 This kind of strategy completely makes sense where:

If you don’t have all 5 going for you, wait until you do before implementing a loan strategy (and keep an eye on that prescribed rate…)